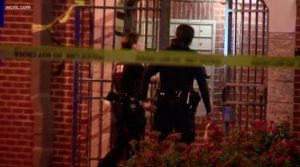 Did negligent security contribute to the shooting death at a Charlotte apartment complex and are justice and compensation available to the family and victims?  Read Our Legal Take below to find out what legal options are available.

A shootout at a graduation party at an uptown Charlotte apartment building left a 24-year-old man fatally shot and three others wounded early Wednesday morning, June 12, 2019, according to CharlotteObserver.com.  WCNC.com is reporting, “Charlotte-Mecklenburg Police were called to a reported shooting at…Apartments on North Graham Street near the intersection with West 6th Street a little before 1 a.m.”  When officeers arrived they found three men shot in the stairwell of an apartment building. Two of the men were rushed to a hospital, the third man was pronounced dead at the scene and a fourth victim showed up at the hospital with gunshot wounds.  The deceased victim “has been identified as Calvin Haines, 24,” according to the report.

According to CharlotteObserver.com, Charlotte-Mecklenburg Police “described the party as a “summer kick-off event” but declined to say who police believe organized the party.”  WCNC.com is reporting, “Airbnb confirmed that the incident took place at a listing, saying they are ready to support local law enforcement with the investigation.”

Police have a suspect in custody, although there could be more suspects according to the media reports.

Residents and guests of apartment complexes have a right to feel safe and secure while on the premises. The level of security provided at the apartment complex is of significance, and is a relevant consideration when analyzing whether this shooting may have been prevented.  The following questions are also important in assessing whether this incident may have been avoided:

The Murray Law Firm has extensive and successful experience in handling security negligence claims on behalf of victims and their families, and suggests that an immediate, unbiased inspection of the property will need to be performed so as to limit evidence from being altered, damaged or destroyed.  The complexities of pursuing a negligent security case are well understood by the legal team at The Murray Law Firm, and it is imperative that Calvin Haines’ family and any other injured victim retain a capable law firm who will work without delay to protect their interests.