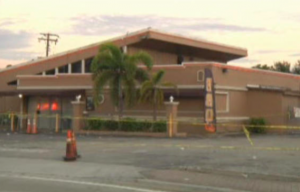 Did negligent security contribute to the senseless shooting of 4 people at a Lauderhill nightclub?  We represent individuals who have suffered a loss or sustained an injury as a consequence of negligent security. Read Our Legal Take to find out if the victims of this tragic incident may have a legal avenue for justice and claim for substantial compensation.

A shooting at Cafe 54 reportedly claimed the life of one person and left three others injured Saturday morning, November 5, 2016.

According to The Sun-Sentinel, the shooting occurred “about 5 a.m. at Cafe 54, 3135 W. Broward Blvd.” One person apparently succumbed to fatal injuries. Three others were transported to the hospital. Their current conditions have not been released.

The nightclub has an alleged history of gun violence, per NBC 6 reports, including shootings in March 2016 and December 2014. The paper reports that “[t]hree people were shot there last March and later drove themselves to the hospital. Two others were shot in at the strip bar in December 2014, and a year before that police were called to the club when shots were fired in the parking lot, though no one was injured. According to the Sun-Sentinel, “[i]t was unclear whether [the recent] shooting happened inside or outside the club.”

Nightclub patrons have a right to feel safe and secure on the property that they are visiting. The Murray Law Firm questions the level of security provided at the business and whether this tragic loss of life may have been prevented.

Generally, property owners are required to protect all patrons legally on the premises from any foreseeable harm. Should the facts of this matter reveal that the property owner or manager failed to provide adequate security to protect those on its premises, the family of the deceased victim may seek justice and elect to pursue a legal claim for wrongful death. Additionally, the other victims of this shooting may elect to pursue legal claims for their injuries.