Did negligent security contribute to this parking lot assault? Read Our Legal Take to find out if the victim may have a claim for compensation. 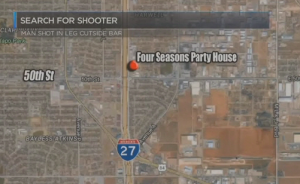 24-year-old Christopher Galvan was reportedly shot during an apparent robbery outside the Four Seasons Party House nightclub in Lubbock Sunday, May 8, 2016.

According to Everything Lubbock, police responded to “a report of shots fired at the Four Seasons Party House,” shortly before 4:00am. The victim, Christopher Galvan, was apparently leaving the nightclub “when he heard gunshots and ran to his vehicle to get away. When he got to his vehicle, an unknown suspect armed with a handgun approached him and placed the gun to his head and demanded cash….” The assailant reportedly shot Mr. Galvan in the leg before taking his money and fleeing the scene.

Mr. Galvan was transported to Covenant Medical Hospital with injuries, per WMC News reports. His current condition has not been released. Police are still searching for a suspect.

Nightclub and parking lot patrons have a right to be safe and secure while on the premises of the establishment that they are visiting.  The Murray Law Firm questions the level of security provided to patrons of the establishment where this incident occurred and whether this shooting may have been prevented.

Generally, nightclub owners are required to protect all patrons legally on the premises from any foreseeable harm. Should the facts of this matter reveal that the owner or management of the establishment failed to provide adequate security to protect those on its premises, Mr. Galvan may elect to seek justice and pursue a legal claim for his injuries.