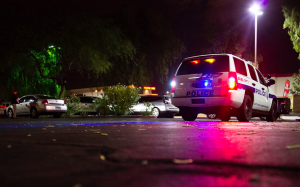 Did negligent security contribute to the shooting of these two men? Read Our Legal Take to find out if the victims may have a legal avenue for justice and a claim for compensation.

Two men were reportedly shot in the parking lot of a Henderson restaurant Monday night, June 27, 2016.

The Las Vegas Review-Journal reports, “four people initially walked out of the Wendy’s at 1011 S. Eastern Ave. and toward the Black Mountain Grill when they were confronted by two people….The group of four exchanged words with the group of two. Moments later…at least one person in the group of two then opened fire on the group of four, hitting two men.”

Both victims were transported to Sunrise Hospital and Medical Center, one with “non-life-threatening injuries” and the other with “critical injuries,” per media reports. Their current conditions have not been released.

A Henderson resident of 20 years apparently told KTNV News she “sees this shooting as part of an unfortunate pattern.” The resident would like police “to address shootings, drug issues and home invasions she’s seen in her neighborhood.”

Bar, restaurant, and parking lot patrons have a right to feel safe and secure on the property that they are visiting. The Murray Law Firm questions the level of security provided in the parking lot and whether this shooting may have been prevented.

Generally, property owners are required to protect all patrons legally on the premises from any foreseeable harm. Should the facts of this matter reveal that the restaurant or parking lot owner or management failed to provide adequate security to protect those on its premises, the victims may seek justice and elect to pursue a legal claim for their injuries.