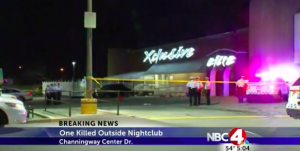 Police have not yet identified a suspect or motive in the investigation.  Per 10tv.com, in June of 2015 two men were shot “[o]utside Xclusive Venue in the 1900 block of Channingway Center Drive, off of Brice Road.” The news outlet reported that the men “were leaving the club when someone shot several rounds at them.”

Nightclub patrons have a right to be safe and secure while on the premises of the establishment that they are visiting.  Given the 10tv.com report regarding prior gun violence, The Murray Law Firm questions the level of security provided to patrons of the nightclub where this incident occurred and whether this tragedy may have been prevented.

Generally, nightclub owners are required to protect all patrons legally on the premises from any foreseeable harm. Should the facts of this matter reveal that the owner or management of the parking lot or nightclub failed to provide adequate security to protect those on its premises, the family of Mr. Hawk may elect to seek justice and pursue a legal claim for his wrongful death.