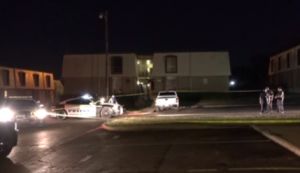 What parking security measures, such as bright lighting, were in place and working at the time of the shooting? (Photo: The Dallas Morning News)

Did negligent security contribute to this apartment shooting? Read Our Legal Take to find out if the victims may have a legal avenue for justice and a claim for compensation.

According to The Dallas Morning News, police “responded to the parking lot of St James Manor Apartments, 3119 Easter Avenue, about 11:30 p.m. They found one person on the ground with a gunshot wound. He told police that he was at the complex when a vehicle drove by and someone in it started firing shots.” A second victim was reportedly “struck by shrapnel from a bullet hitting the ground and ricocheting.” The current conditions of the two victims have not been released.

Police are apparently still searching for suspects, who may have fled the scene in a blue Ford Focus.

Apartment residents and guests have a right to feel safe and secure within the community. The Murray Law Firm questions the level of security provided at the apartment complex and whether this shooting may have been prevented.

Generally, property owners are required to protect all residents and guests legally on the premises from any foreseeable harm. Should the facts of this matter reveal that the apartment complex owner or management company failed to provide adequate security to protect those on its premises, the victims may seek justice and elect to pursue a legal claim for their injuries.