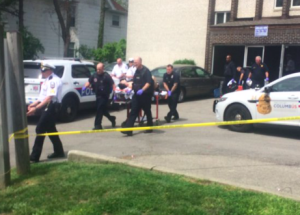 Did negligent security contribute to this horrific apartment shooting? Read Our Legal Take to find out if the victims may have a claim for substantial compensation.

The Columbus Dispatch reports, a male gunman “went to an apartment in the building, knocked on the door and opened fire on Lopez and Kelly.” Both Mr. Lopez and Mr. Kelly were transported to the hospital with critical injuries.

Police have not yet identified a suspect. They believe the crime “to be robbery-related,” per Columbus Dispatch reports.

“Those who live on Northwood say they were shocked by such a violent crime. They tell ABC 6 that property crimes have been on the rise, including car burglaries, vandalism, and home break-ins,” Fox 28 reports.

Apartment residents and guests have a right to feel safe and secure within the community. Given recent reports of area crime, The Murray Law Firm questions the level of security provided at the apartment complex and whether this horrific assault may have been prevented.

Generally, property owners are required to protect all residents legally on the premises from any foreseeable harm. Should the facts of this matter reveal that the complex owner or management company failed to provide adequate security to protect those on its premises, the victims may seek justice and elect to pursue a legal claim for their injuries.