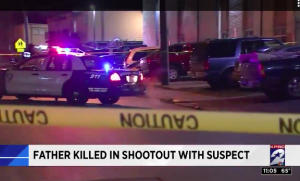 Manuel Rodriguez Killed in Apartment Shooting.  Did a Security Lapse Contribute to the Death of a Young Houston Father?

28-year-old Manuel Rodriguez was reportedly shot and killed in front of his family during a robbery outside of the Santa Monica Apartments in Houston Sunday evening, January 8, 2017.

According to KPRC 2 News, Mr. Rodriguez “was unloading groceries with his wife and three children around 8:30 p.m. outside the Santa Monica Apartments in the 7000 block of Ashcroft Drive when a would-be-robber walked up to his family.” Mr. Rodriguez was fatally struck while attempting to protect his family in the subsequent shootout.

Did negligent security contribute to the death of this young father? We represent individuals and families who have suffered a tragic loss or injury as a consequence of negligent property security. Read Our Legal Take to find out if the Rodriguez family may have a legal avenue for justice and claims for substantial compensation in Texas, or call now for a free consultation with out legal team: 888.842.1616.

Apartment residents and guests have a right to feel safe and secure while on the premises. The Murray Law Firm questions the level of security provided at the apartment complex and whether this tragedy may have been prevented.

Generally, property owners are required to protect all patrons legally on the premises from any foreseeable harm. Should the facts of this matter reveal that the owner or management of the apartment complex failed to provide adequate security to protect those on its premises, the family of Manuel Rodriguez may seek justice and elect to pursue legal claims for his wrongful death.