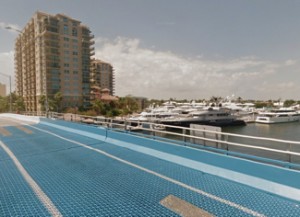 Cyclists across south Florida are demanding improvements to perilous inter-coastal bridges, which have left hundreds injured throughout Miami-Dade, Broward and Palm Beach counties.

The cycling community has suffered severe cuts, fractures and other serious injuries due to the grated draw bridges crossing over south Florida’s inter-coastal waterways. Victims are now voicing their demands for improved cyclist safety. The Miami New Times reports:

Take the case of Stephen Tate from Miami, who commented on the post that the Miami River bridge gave him so much trouble that he felt he shouldn’t be alive: “just had to get 20 stitches spread between my hands, elbow, and hip from a fall I had crossing over the Miami River downtown. I got off easy considering I could have been bulldozed by the truck behind me. Grated bridges are death traps for anyone on two wheels!”

He wasn’t alone. At least 30 people commented, with multiple folks comparing riding over a wet drawbridge in South Florida to driving over a cheese grater. Others, like Christina Warren, said they tore ligaments and owed thousands in medical bills: “I wiped out on wet grates. Broken nose, 50 stitches in my face, and torn ligaments in both thumbs! I contacted multiple lawyers, as there was no signage saying danger or walk bike, etc. No one was interested to represent me. With deductible, etc., I was out $5,000 in medical expenses!”

Or Salomon Jakubowicz: “I almost died on one grated bridge, and it was not raining. It is always slippery, and the metal is sharp. I still have the scars. I fell November 2012 on the Dania Boulevard grated bridge. It is slippery with the typical humidity… The metal broke my helmet in half and was encrusted on my ribs, shoulder, and leg.”

Advocates for cyclist and pedestrian rights at The Murray Law Firm are deeply concerned by the lack of response by city and county officials. According to the Miami New Times report, one Broward County bridge is now being tested for improved cyclist safety measures. However, this response is underwhelming and insulting to the south Florida cyclist and pedestrian community, who have endured years of hazardous bridges and roadways and still find themselves waiting.

The Murray Law Firm work tirelessly to protect victims and families of pedestrian and cycling accidents throughout Florida. Anyone seeking further information or legal representation is encouraged to contact us toll free at 888.842.1616 or by email at legal help@murraylegal.com.