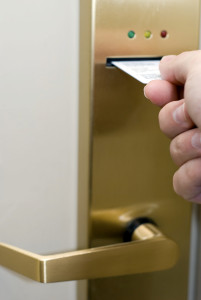 Location. Price. Amenities. These are items most travelers look for when selecting a hotel or motel. Requirements that may not make a traveler’s hotel wishlist are: bright lighting; surveillance cameras; 24 hour security; and room key-controlled entry to the property.

A CBS This Morning report warns, “Far too many people let their guard down when traveling, especially when it comes to their hotel.”

Read the full report for “a breakdown of everything you need to know about hotel safety in the U.S.”:

Although 9/11 was a wakeup call for everybody, most officials in the hotel industry in the U.S. aren’t willing to spend money on security.

Hotels are filled with vulnerabilities: multiple entrances and exits, driveways, underground entries, spacious and busy lobbies, non-guests who eat at the restaurant and come in for conferences and events. But those risks are also the hotels’ livelihood: it’s not in a hotel’s best interest to scare away potential business by employing armed guards, installing metal detectors or X-rays, limiting entrances, or even checking IDs.

In fact, security experts don’t know of ANY hotel in the US that has implemented high-security measures that we see in Asia and the Middle East: metal detectors, explosive vapor devices, barriers in front of the hotel, screening of bags, screening under vehicles, or “hardening” glazing structures of windows and entranceways.

In general, the most an American hotel will do is implement increased security cameras, limit access into the building, require key cards to get to guest room floors, and train staff to be alert to odd behavior. Until recently, even security cameras or CCTV on guest room floors was considered taboo. The measures that have been implemented also help prevent petty crime and assault, so the hotels’ motives for doing so are manifold.

Most U.S. hotels are mid-market products  where you won’t see anything more than cameras for loss prevention and maybe locking perimeter doors. It’s the higher-end hotels that have implemented any significant measures—and much of that is to block out the riff-raff and ensure privacy.

Don’t Worry, Your Personal Information is NOT Stored on Key Cards

In 2003, the Pasadena police department police issued a warning about plastic hotel card keys. According to this message, a local Doubletreehotel had key cards that contained encoded personal information such as your name, a partial home address, the hotel room number, your check out date…and your credit card number. Well, simply put, hotels do not put your personal information on the card. Key cards actually use RFID technology, or a system that generates a code that the lock recognizes, NOT your room number.

According to Snopes.com, what happened was the police had been made aware that a keycard could be wiped clean and then reused by identity thieves to store information, NOT that the hotel had put the information on there. Any blank magnetic card could be used for this purpose. But the  information got released and became so widespread that the Pasadena police had to issue a retraction in 2009: “As of today, detectives have contacted several large hotels and computer companies using plastic card key technology and they assure us that personal information, especially credit card information, is not included on their key cards.”

HOWEVER…Hotel Locks Aren’t as Secure as You Think

A Mozilla developer and security researcher demonstrated the security in one of the most common key card locks in hotels. At the Black Hat Las Vegas security conference in July, Cody Brocious reverse engineered the locks by inserting a small, homemade device into the keycard lock, read the digital key that triggers the lock, and opened it. He explained that it was “stupidly simple” to exploit the locks. Onity locks can be found in more than 4 million hotel rooms around the world.

In September, there was a there was a string of break-ins at a Houston Hyatt in which the thief hacked the lock with a digital tool that triggered the door to open. The hotel itself took measures for a temporary fix by puttying the vulnerable port on the door. Since then Onity has been offering to replace the circuit boards for locks bought after 2005; older models will replace the locks for a fee, or will send a plastic plug to cover the port.

Hotel Safes Aren’t as Safe as You Think

The innkeeper liability laws limit how much the hotel is responsible for items left in your hotel room–even if it’s in the safe. Even worse, they’ll often charge you for the privilege of using that safe. The amount varies by state, but you can usually find the exact amount posted on the back of your hotel room door or in another conspicuous place. You’re better off storing valuables like passports in the front-desk safe. Confirm how much they’re liable for, and a get a written receipt of the items you’ve left there. If you have to leave items in the room, like a laptop, consider storing it in a slashproof bag. Then use a cable lock that holds the zipper shut and secures the bag to a stationery piece of furniture.

That Room with a View Can be Deadly

There’s not a fire department in the country that can easily fight a fire above the eighth floor, so ask for a lower floor.

Find out what kind of fire safety devices are in place. Every hotel should have hard-wired, single-station smoke detectors in each guestroom. Those more than three stories should have an automatic sprinkler system with a head in each room.

Check the US Fire Administration website for a database of fire-safe hotels.

You know the map on the door that show the nearest exits? It’s there for a reason. Then you actually have to find those exits. You should be able to locate at least two exits, in case one is blocked, and count how many doors there are between your room and the exits.

Keep your room key and a small flashlight in your shoes by your bed, in case you have to make a quick escape. Bottom line: a hotel fire is serious business, but there are steps you can take to make sure you’re as prepared as possible.

We’ve Recovered Millions for Our Clients…Contact us Now for a Free Consultation.

The Murray Law Firm has extensive and successful experience in representing victims of hotel and motel security negligence and we offer our legal expertise, if desired.  We typically represent our Clients on a contingency agreement, which generally means that no fees or payments are owed until and unless we recover.  Anyone seeking further information or legal representation is encouraged to contact us via e-mail (click here) or call at 888.842.1616. Consultations are free and confidential.